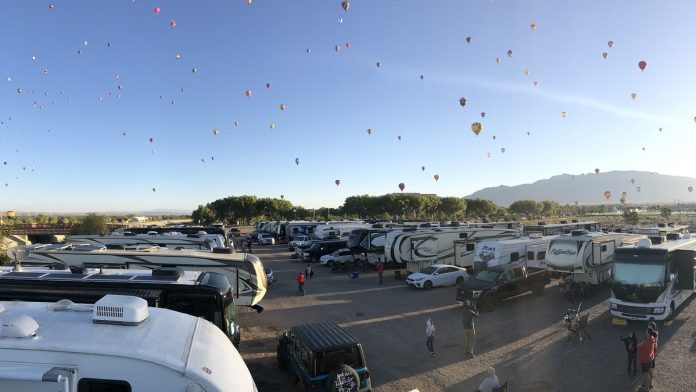 In 8 years of travel and 5 years of fulltiming, the event that is my family’s favorite is the Albuquerque International Balloon Fiesta! There’s something special about seeing more than 500 balloons launch from the launch field in a series of waves. And the best part?! THEY LET ANYONE COME HELP LAUNCH AND CATCH THE BALLOONS!

April 2021 note: as of writing, the Balloon Fiesta is still planning on the event occurring this year. Obviously, with the COVID impacts, it’ll be different but hopefully this wonderful event continues on. My descriptions below are based on our experiences from 2017 and 2019.

Let’s start with my absolute favorite part of the event. I mean, seeing balloons flying over top of you is awesome. Walking along the balloons while they’re inflating is magical. But getting to be part of the team that helps launch the balloon and maybe even go catch it, this is what has made it such an immersive experience. But what is crewing exactly?

Each balloon needs a small team to help launch it. At a minimum, they need four people (pilot, crew chief, and 2 crew members). Up to a point, the more the merrier. You’re encouraged to volunteer and the pilots are amazing about welcoming the help. It’s a neat experience: both sides are appreciative that the other is there from their own perspective.

As a volunteer, you may get to help with all aspects of getting the balloon setup, inflated, and then launched. A handful of the volunteers then load into the truck to chase the balloon wherever the winds may go and then help pack it away.

I’d be remiss if I didn’t mention Fred and Christel Dinkler with the Carried Away balloon. Fred and Christel reached out to Fulltime Families a few years back and said, “hey, we love what you guys do and we would love if we could be your pilot.” They have treated our group’s kids like gold. And they took a special shine to my daughter and allowed her to crew as much as she wanted. As a thanks for her hard work, they have taken her up for flights both years that we’ve attended the Albuquerque Balloon Fiesta! (Note, getting a chance to go on a flight is a nice perk of crewing- it’s not guaranteed, but many pilots make the offer!)

We start our day at about 5am. My daughter is the first up and out, she’s gone to find friends to walk to the Fiesta field together for a morning of crewing. The excitement of the day makes it pretty easy to wake up. A quick glance at the day’s forecast generally says the same thing: very cold in the morning to bright sunshine by lunchtime. Layers are the name of the game.

We’ll either walk to the Fiesta field or we’ll take one of the shuttle (aka school) buses. The Fiesta has shuttle bus stops throughout the RV park. They’re nice because they’re heated. Strollers, wagons, chairs, etc all have to be folded up for getting onto the bus. I’ve mentioned before that we’re overpackers… it really shows as we Beverly Hillbillies it onto the bus.

Once at the Fiesta launch field, there are a handful of entrances. With 2019, they introduced metal detectors to their bag check process. Once through there, you can either buy tickets or if you purchased from Costco ahead of time (at a discount), you can head right for the people with ticket scanners.

You need 1 ticket per person (over a certain age) per session that you want to attend. There are sometimes 2 sessions per day, a morning one and an evening one. Each with their own events. They only do balloon launches in the morning.

Once inside the Fiesta grounds, there are a handful of entertainment options around one side and a set of food and vendor tents further along the same walking path.

The balloons launch from the field. It’s setup in quadrants so the pilots and crew know where to go. The lower the number and letter, the more crowded it is. If you want some space and not to be tripping over your neighbor, go to the higher letters and higher numbers. But, do enjoy the crowd a little, it’s fun to listen to people cheer as the balloons lift off.

Be aware, if it’s too windy, the balloons won’t fly. They’ll often stand up in static displays, but they won’t launch. And sometimes it happens that it’s even too windy to stand them up.

The days that they do fly, the Dawn Patrol goes up just before day break. These are a small select number of balloons fitted with lights. Seeing these balloons illuminate against the dark sky is really really cool.

Then provided the weather stays good, the balloons launch in a series of waves. Every other row goes up so the pilots have some spacing. But this is what they call the Mass Ascension. In 2019, there were 586 Balloons that participated in the Festival. On any given day, a majority of them would fly.

Now, what if you don’t want to get up super early and head to the launch field? Well, that’s an option too. We’ve been lucky that more times than not, the balloons have flown over the RV parking.

You might try to sleep in, but come 7am or so, you’ll hear the propane burners overhead and that mermaid’s siren will lure you outside.

They don’t always fly overhead but we’ve been in the south lot and the north lot and have been treated to shows each time. Maybe not every day, but when they do, it’s spectacular!

Different evenings have different events, with the most occurring on the weekends. Some of the evenings, they’ll have a static display of balloons where they inflate the balloons on the field and keep them standing. They’ll time light up burns with the other balloons and it makes for an awesome display.

Some evenings will have fireworks. And for a small-ish event, they put on a heck of a fireworks show!

An afternoon or two, they’ll have rodeos where there are different precision events with the balloons like dropping a ring on a post without touching the ground. My wife and kids saw these the first time we went but it got cancelled due to weather last year.

During the week, they have smaller (and free) events. One that caught our fancy was the gas balloons that race across the country! The balloons are inflated with hydrogen (it used to be helium but that got too expensive). There are teams of 2 in the balloon and they literally scoop out a bit of sand to control the flight. The amazing part is they fly from 500-2,000+ miles!

By far the best experience for the Balloon Fiesta is staying on site. The flights start very early in the morning, just before day break for the “Dawn Patrol” (aka, a small set of balloons equipped with lights). Traffic is atrocious for miles in each direction from the gates. People literally talk about spending 2 hours to go just a couple of miles.

But if you’re staying on site, you can walk or take a shuttle to the launch field. The catch? It’s primarily dry camping with no utilities, it’s cramped, and it’s pretty expensive for what it is. I’ll talk a little more below about the types of campsites offered, but there are a small number of sites that have water and electric.

There are a few RV lots around the Balloon Fiesta launch field. As I said, most of them are still dry camping and they’re all super snug with your neighbors. I think I heard someone mention that the average site size is 20′ wide by 50′ deep. And you’re back to back with your neighbor with barely as much as a walking path between them.

The largest lot is the RV South Lot with Standard and Water + Electric spots. Depending on where you’re camped, this can be a mile or more of a walk to the gate of the Fiesta’s launch field and then depending on where on the launch field you’re headed, it can be another 1/2 mile or so. The good part is, the Fiesta has buses running and will shuttle you back and forth from the Fiesta field.

The majority of these spots are dry camping ($40/night). There are some water + electric spots ($95).

There are “Boxes” marked off within the campground that pilots often land in. The spots immediately on the box are dry camping and an extra $10/night ($50/night).

These lots are all dry camping but are much closer in proximity to the launch field. We lucked into a beta test of the North lot last year and ended up with a front-row spot overlooking the launch field. The view from the camper’s roof was amazing! But, the close proximity comes with a price ($100/night).

These are amazing looking spots are perched on a hill overlooking the launch field and come with water + electric. Truly fit for a President or King, these spots are also terrifically expensive ($250/night).

There are a few rules that might be different than what you’re used to.

Go If You Can!

Over our years as a fulltime family, both of our trips to the Albuquerque Balloon Fiesta stand out as highlights. You’ll need to follow the 2021 announcements since 2020 was “postponed” (cough, canceled, cough) and reservations pushed back to this year. But if you can snag a spot, it’s truly a wonderful event.