Because I work from home, I’m able to translate that to working from the camper as we travel. Often times, I’ll spend 8-10 hours a day at a desk. In the summer of 2014, we spent just about 8 weeks on the road over a variety of stops. I found that my biggest issue was that I didn’t have a consistent and quality work setup.

My needs for a work environment generally are:

Because I’m in an RV, I had a couple of more:

What I Had Before

As I mentioned above, I was nomadic within my nomadic lifestyle. It was terrible. But worse than that, I worked off of a TV tray. It was likely made in the 60s or 70s. Let me count the ways that it sucked:

After we decided on our crazy adventure, my wife and I talked through a handful of ideas on paper one night. We drew up a plethora of ideas from wall-mounting something, to a flip-down desk, to building a free-standing desk in the bunkhouse, to some ideas pretty close to what were executed. We did decide that we definitely wanted to install the desk into the master bedroom and not the bunkhouse due to not invading the kids space (and thusly, them invading mine while I need quiet time). Drawing inspiration from this, I liked the idea of building upon the dresser.

The big design limitations that we had to contend with were:

We made a few rough sketches and armed with the ideas there, I came out to the camper armed with a couple of cardboard boxes, some scrapwood, some clamps, a straightedge, a ruler, and a utility knife. I also brought my laptop, monitor, and measured my keyboard and mouse.

The idea was that my laptop, keyboard, and mouse all would be on a pullout drawer and the monitor would sit above it. When I was done at night, I’d close the drawer and that would be that. So, that’s what I mocked up.

At the end of mockups, I was happy with the desk layout but I wasn’t sure how to make it work. Having a raised platform the whole way meant that I would either be blocking the closet door or the emergency window. Both of which were no good.

And then my wife mentioned splitting them up- the laptop under the monitor and the keyboard on its own- supported/suspended in some way. I envisioned some kind of piano hinge and fold out piece. It’s a little more work than just a drawer slide, but my keyboard and mouse together are close to 30″ wide- more than a drawer could be.

I now had to commit the project to an actual drawing. In doing that, I was then able to slap some measurements on the pieces that I needed for the build. Here’s the first set of drawings: 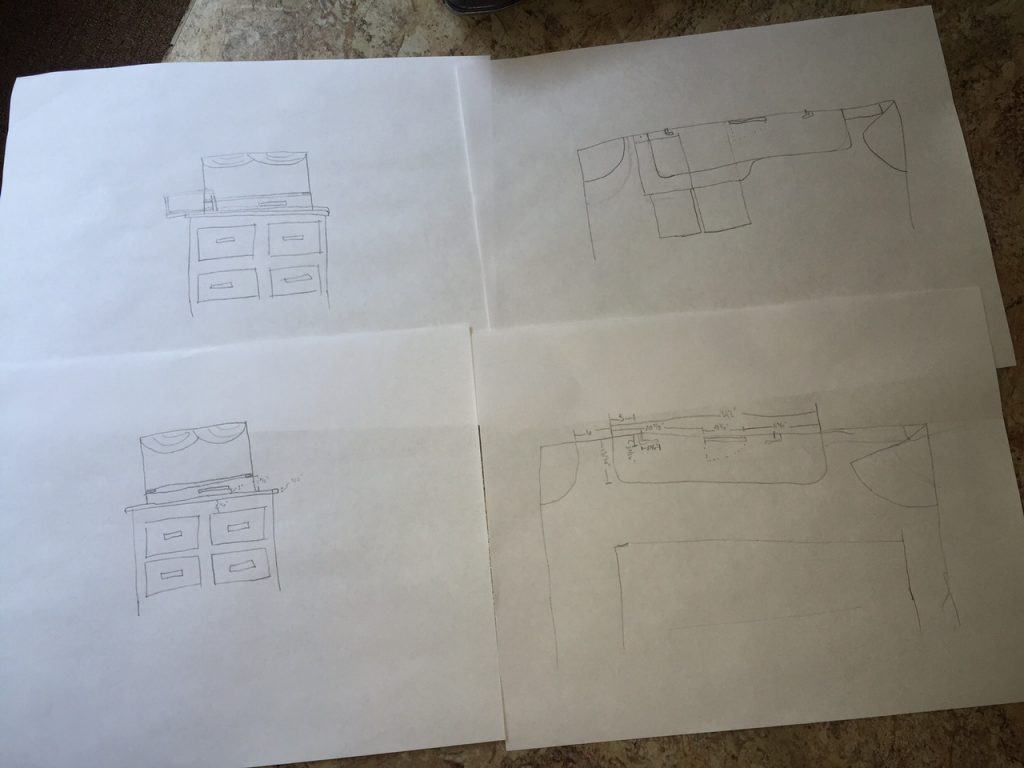 The first thing that I did was make sure that with the added length, the closet door would still be usable. Cardboard to the rescue:

And finally, some last checks to make sure that the emergency window would still be usable:

Satisfied, it was time to really commit the project to a drawing with measurements:

Not pictures, I put together a list of individual pieces that I would need and their dimensions. This proved useful in determining the size of plywood that I needed as well as the cuts that would be required (which was good because Home Depot came through BIG TIME!).

As luck would have it, I was hosting a sleep over with my daughter and two of her friends. They’re all great kids. I warned them going into Home Depot that I literally had no idea what I was after and needed their patience.

The staff members at Home Depot were amazingly helpful. One guy in hardware talked through the idea with me, verified the hinge and drawer slides that I had picked and brainstormed ideas for supporting the flip over portion for the keyboard. The worker back in the wood area confirmed my wood selection and then cut almost all of the pieces to the dimensions that I needed (well beyond their usual minimum widths of cuts). The only problem is that the cuts were rough and tore up the top ply on the backside of the cut. I had to be very selective of which face was showing.

Armed with a pile of wood, I was ready to assemble my desk.

As the night wore on, my motley crew invaded the garage and demanded ice cream. Note, that I do feel some trickery was afoot… the Home Depot picture shows a much injured crew, but for ice cream- everyone is miraculously healthy. 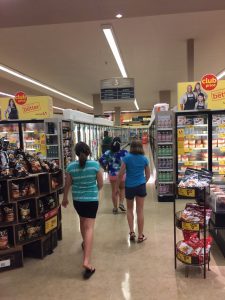 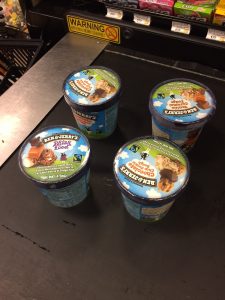 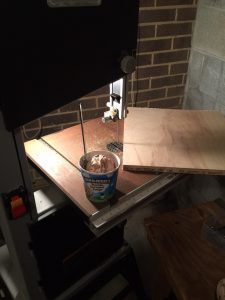 With any project, I like to keep myself humble. The first stunt was trying to cut the corner of my workbench off:

Once I got past that, I misread the instructions for the drawer slides and cut my drawer 1/2″ too long.

But, overall- I was making good progress:

I drew and cut my curve for the seating area. The narrow part was supposed to match up with the existing desk. Feeling confident in my (crappy) memory, I happily cut it back to 13″… which was 1/4″ shy of the actual dresser top. Humbled; again.

Fortunately, a fortuitous mistake later wrecked that piece and it was rebuilt to the proper size. A second bit of luck is that I never accounted for the ability to get into the drawers when the desk was in the “stowed” position. In fact, I worried quite a bit if it would work out as it was something that completely slipped my mind during design. It would have been the undoing of the project if we lost access to one or two of those drawers. Fortunately, it all worked out.

To dress the desk up and for comfort of my arms, I wanted to round over the edges of the desk top. I contacted a newfound friend and asked for a favor. I swung by his house with my posse in tow.

As I mentioned, Wayne did end up remaking the base for the desk but it was a good thing- it let us cut the narrow part to the proper size. It’s getting close:

The final two things remaining were:

The first was “easy”- I took Velcro One-Wrap and stapled 1/2 to the underside of the shelf and 1/2 to the underside of the base of the desk. For travel, I just connect the two pieces. (And, humble pie.. after my first trip- the staple pulled out of the top. I’m going to try 2 or 3 staples next.) For actual desk use, I just roll them upon themselves and you barely notice them.

For the leg, I decided that I wanted a broad support for the flipover shelf and floor. I bought two 10″ pieces of 1×4 oak (the friendly folks at Home Depot cut them to size) and two 3/4″ oak dowels to make sort of an “I” shape. I assembled them together and then stapled Velcro One-Wrap to the top of the leg and the bottom of the flipover shelf. This broadly supports the keyboard shelf (which I lean on often), lets me easily remove it, and most importantly – lets me reposition it until I get some time in using the desk to know where my legs will want to be.

The last task was to secure the desk to the dresser top. I tried to come up with ways so as to not damage the dresser top, but ultimately what I went with was running screws in up from the bottom. Yet another dose of humble came in this step when I broke 2 different screws. Fortunately my father-in-law was there and told me that I was likely not drilling my pilot hole deep enough AND to try and use some dish soap on the screw itself. That did the trick.

I did find that my window isn’t square to the desk. One side dips down a bit. I attacked it with a wood rasp and wailed the wood back where it was contacting the window. I sanded it smooth and you can’t see any of it.

And, for all of my measuring- my final dose of humble pie came when I found that my laptop drawer hit the guide for the curtains. I had to remove the drawer slide and notch the back corner out. No pics.

I’ve now used this desk for 3-4 working days. Overall, it’s a TON better than my old desk but not without its own faults: 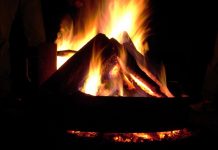 How to: Make Your Own Easy Fire Starters