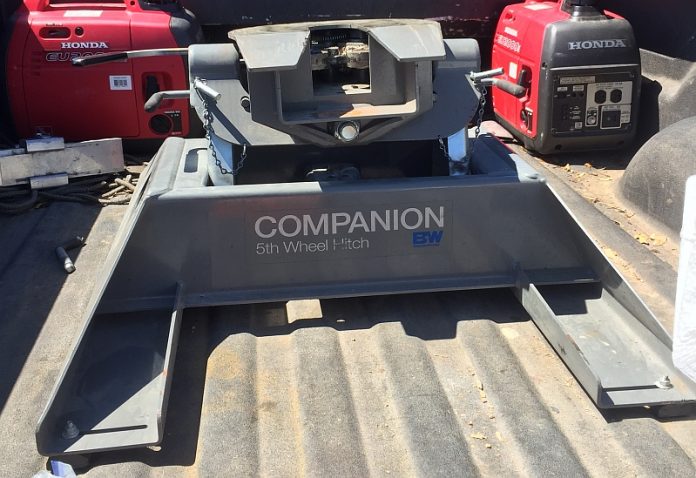 This is part of a 3-part series (and I might even extend it out to 4-parts) on fifth wheel hitches. I previously wrote about different hitch options for fifth wheels. Today, I’m going to write about a traditional fifth wheel hitch from B&W.

The setup that I chose was to install a B&W gooseneck into the truck first. They then have a fifth wheel hitch that uses the gooseneck opening and they drop a post down into that opening and use the gooseneck pin to lock it into place.

On the first Companion fifth wheel hitch I had, the post was separate from the rest of the hitch. You would install the post first and then you would place the hitch down over the post and tighten a set of U-bolts. One last draw-down bolt, and it’s all locked together. The hitch is good up to 18,000 lbs.

One of the issues B&W had was that this would deflect the bed. This was a bit more of a truck issue than it was an issue with the hitch. And, if I recall correctly, they did offer gap fillers for under the hitch. I also had issues with some rubber pads not staying adhered to the hitch base.

On the updated Companion, there are less tools needed as the post is attached to the Companion hitch. You still need to pin the post with gooseneck pin and then tighten the draw-down bolt, but that’s about it. The newer version has been upgraded to 20,000 lbs.

B&W fixed both of the issues with this iteration – they provide the gap fillers and removed the need for the rubber pads.

Each version has quite a bit of adjust-ability, forward and backward with how you turn the hitch post (for big changes) as well as positioning the upright arms (for smaller changes). You can raise and lower the coupler by adjusting the arms up and down, as well.

For newer trucks, B&W makes fifth wheel hitches that are specific to the puck system which is provided with the fifth wheel prep. The two biggest benefits are the lack of tools needed for removing and re-installing the hitch into the truck and the potential increase in ratings (up to 25,000 lbs.).

B&W does offer a rails version of their hitch called the Patriot. For users of flat-bed trucks, they have a special lower-height version.

In use, the B&W hitch is a joy. And as a newbie, I felt safe with it. It seemed (and still does) like it was as idiot proof as it comes. Pert near impossible to high hitch. And I accidentally proved that it won’t drop the camper if you forget to pin the pull handle closed (longest story shortest: I towed for 60 miles before stopping for a break when I realized what I had done). I’ve been able to hitch and unhitch from all sorts of crazy angles. Uneven ground never caused an issue with getting it unhitched.

B&W hitches develop a cult-like following with their users. I am happily a card-carrying member of B&W Fan Boy Club. And the only reason I moved away from my beloved B&W is because I purchased a 21,000 lbs. toy hauler recently and my hitch was only rated to 20,000 lbs. I’ll talk about its replacement in the next post in this series… (hint, it rhymes with Andersen and makes a mighty claim to be the Ultimate Fifth Wheel connection).