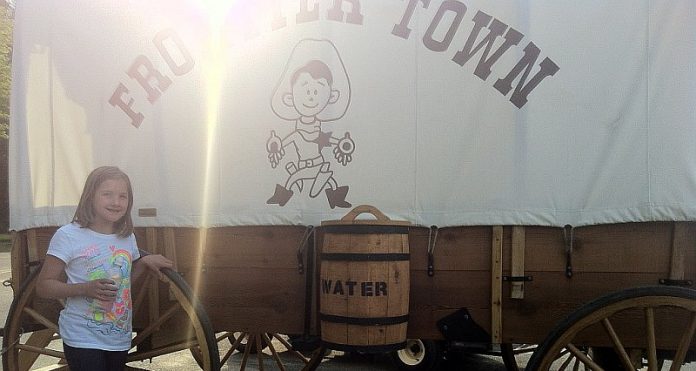 This was our second trip to Frontier Town. We visited a couple of years ago when we camped in our pop-up and just last weekend (the weekend before Memorial Day). It turns out, the weekend before Memorial Day in Ocean City is classic car weekend – lots of fun, but a fair amount of NOISE! This is a nice RV resort with level sites and pretty decent room to get around. There are a lot of amenities (in season more so than out of season) and there’s usually something for just about everyone. Again, it’s an RV park – so there isn’t much space between the sites nor a whole lot of privacy.

Sites (Gravel or grass pads, quite level, some with cement pads for tables)

When we camped in our pop-up, we were assigned a site in the “B”-lane which was water and electric only. The site was almost entirely grass and fairly level. We didn’t realize that it would be completely in the full-sun. We ended up asking if there were any sites with shade and got one that had a little bit (still same general area in the “C”-lane).

This time, our choices were limited as we’re over 40′ for our fifth wheel and still need room for the truck. Being an “event” weekend in Ocean City, the sites were even more limited. We ended up at site G1. Not a bad site, but it was a corner on the main “road” through the campground and had a street light on it. It had us pretty well lit up at night; to the point that we needed to leave our awning out so the inside of our camper would be a little darker. Due to it being the classic car weekend, many of the cars had quite loud engines – loud enough that a couple of times, I thought my water pump was running! My wife (who isn’t a terribly light sleeper) said she heard cars heading out as early as about 6am.

Otherwise, it rained pretty hard while we were there. There were quite a few sites that had a lot of standing water. We saw 2 or 3 different folks in tents who were packing up what looked to be very wet gear from the  A/B/C lanes.

We drove around and picked a couple of favorite sites:

Their online reservation site allows you to specify the features of your site and RV and it shows you options that would be best for you.

Other than possibly ending up in the “Z” lane, the campground left us with good maneuvering capabilities. When exiting, I didn’t even try making what amounted to a U-turn out of our site and then an immediate right. Instead, I followed CE down to the marina and then out.

Parking was a little tricky with our site due to an ill-placed tree and worse placed aluminum cans recycling container. Knowingly (and while my wife/spotter attentively watched), I came within an inch or so of it as I was backing into our spot.

Bathrooms and Showers (Clean and warm)

In the pop-up, we used the bathhouse between C and D lane for showers and making poops. This trip, I stopped into Bathhouse #1 near the marina and activity pavilion for a last minute pit stop. Both times, they’ve been clean. This time it was quite warm inside (it was a little chilly the day we left).

There was a decent sized pool in the campground that was surprisingly open this past weekend. The water appeared to be frigidly cold, though that didn’t stop my daughter from swimming for a bit. Clean and clear – but very low use, I’d imagine! Otherwise, there is a marina for boat launching, fishing & crabbing pier, a couple of playgrounds and mini-golf. There’s also a restaurant on-site.

Finally, Frontier Town has an entire waterpark that is open when in season with multiple slides, a lazy river and other attractions that is included in the price of your overnight stay. Needless to say, my daughter was not pleased when it wasn’t open this past weekend and has already asked if we can go back when it is open.

A note – their wifi sucks. We repeatedly got disconnected and had to re-login. If I recall correctly, it was here in the pop-up that I finally decided to enable the hotspot tethering on my iPhone and ended up with better WiFi from it than from the park. I almost remember that for every 45 minutes that I was online continuously, I’d get booted entirely for 5-15 minutes.

When we were here in the pop-up, I worked using my AT&T service with my hotspot tethering on my iPhone. This time around, I wasn’t working, but didn’t have any phone service issues.

We don’t spend the effort to “dial-in” our over the air service and it ended up being quite overcast and cloudy while we were there. The TV went from being OK with 4 or 5 channels to unwatchable due to blotchiness and pauses.

We didn’t try the cable service. Still carrying that 25′ of coax new in it’s packaging…

The camp store is one of the largest that I’ve been in and we’ve used it both trips now. Friendly folks if I recall correctly.

The star is mostly the lack of privacy at all of their sites but more so due to the price. Pre-season, it’s quite almost affordable. Our 3 nights came were $45/night for a total of $135. In-season, I believe we paid almost $90/night. Both are pretty expensive for camping but compared to hotels in the area, it’s quite cheap. The cheapest room out of season room that my snobbishness would stay at is $100/night off-season and $200/night in-season with the occasional cheaper exception. All of which would be less space, less room for sleeping accommodations and not nearly as comfy as it being “our” stuff.