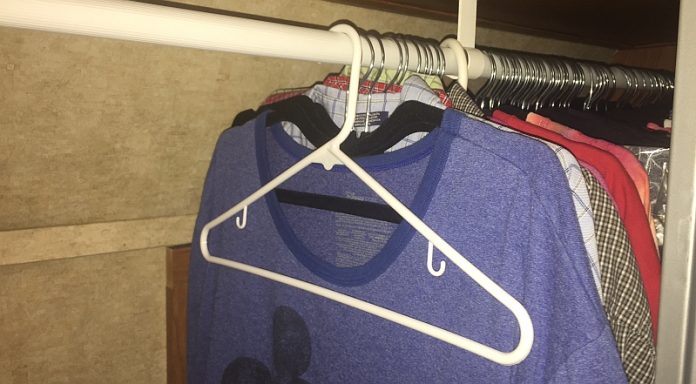 I’ve been using Higher Hangers shortly after they finished up their Kickstarter and ran a promotion on social networks where they gave 200 hangers to whoever spread the word the most about these special hangers. I shared on a few RVing groups and the response was pretty phenomenal. I gave away 1/2 of the hangers to a friend and kept the other half. (Let me tell start with- I had no idea we had 100 pieces of hanging clothing! We live in a camper, how is that possible?!?!)

In my fifth wheel, the bedroom closet is in the nose. Before we got the higher hangers, my hanging shirts would lay on the floor. With the Higher Hangers, they now clear the floor. The same goes for many of my wife’s shirts. For her dresses, she hangs the top and then clips the bottoms up to keep them off of the floor. Back in the bunkhouse, my daughter has a short wardrobe for her clothes and try as I might, she keeps growing- to the point that her clothes were bunching up on the floor in there; again, the Higher Hangers have really made a difference.

Now, for the ax to fall- we have found that the black velvet hangers aren’t nearly as durable as other hangers. Over the past year of use, we’ve had a good 10 or so hangers break. I’d blame the kids, but they’re only responsible for a couple. I keep telling myself that I’m going to order some of their heavier duty white HDF hangers.

Secondly, the cost is a real factor. Had I not been gifted 200 hangers, I don’t know that I would have sprung the money for them. But now after owning them, I’ll say they’re worth it.

And finally- good and bad, the velvet ones really grip clothes. In a RV and going down the road, we’ve never had any clothing slip off due to travel. BUT, that same grip and grab is a little annoying when hanging clothes up and taking them off. Overall, my wife says she likes them- so that’s that. (smile)

Final Word, But Them!

Higher Hangers are available on Amazon. Overall, I give them a buy recommendation.