Easily one of the most nerve-wracking parts to buying our fifth wheel was getting used to hitching and unhitching it. I had heard stories of people dropping their fifth wheel onto the bed rails of their trucks and have always had visions of death or dismemberment of important body parts while I hookup or unhook. To say I’m paranoid might be an exaggeration – but, very particular and extra cautious are probably fair.

For me, and I’m not knocking anyone’s brand of fifth wheel hitch – part of my decision for which hitch would I use came down to the type of mechanism that held the fifth wheel pin to the hitch. I went with the B&W Companion fifth wheel hitch because it has jaws that wrap around the pin. They’re not the only brand that does this, but I liked the definite visual of knowing that I was latched. Secondly, I can’t close my hitch arm to lock the pin in place unless it’s properly seated. Finally, it’s just really nice to have a completely empty bed without the hitch in place. But, this isn’t a safety concern – it’s a Doug-spastic-ness concern.

First off, if my fifth wheel is parked anywhere, I am using wheel chocks. Always. They’re the first thing on when I start unhitching and the last thing off when I am hitching up to leave. You don’t want any forward or backward movement allowed when you’re hooking up to alleviate any undue stress on the front landing gear. The wheel chocks prevent that.

Once you get to your destination, you will need to level the camper however your RV is setup. The lucky few have the fully automatic systems. They just push a button and go. For the rest of us, we have to level side by side using boards or Lynx Levelers to raise the low side. Once you’re leveled side to side, you can start the unhitching process:

These steps are obviously, specific to my camper and hitch. You need to modify these for your own specific setup. 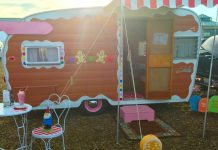