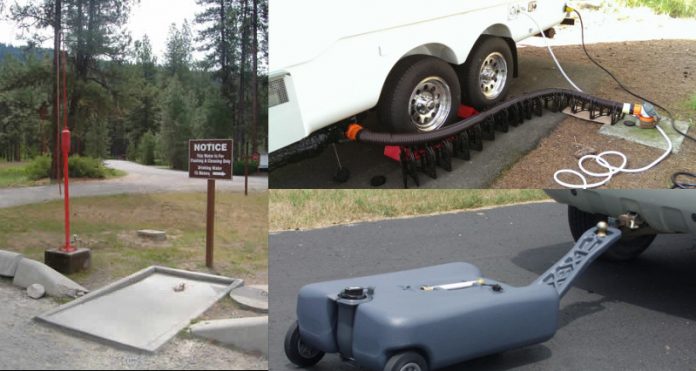 After towing, I think the single most daunting idea when it comes to campers is the concept of having to deal with the poops and the pees. In a camper, that stuff goes into a tank and then has to be periodically dumped when the tank is full. Cue visions of the RV movie. But, it’s really not that bad- honest!

Let me clarify that I make a distinction between dumping my tanks (simply emptying the gray/black water out) and flushing my tanks (refilling with water and repeatedly dumping until it’s running clear). I flush my tanks as often as possible to keep odors at bay with less chemicals needing to be used.

First things first, the situation that you’re in drives how things work:

Expand each scenario to learn more.

At a campsite that has sewer hookups

An important consideration- you should never leave your black tank valves open, even when you’re hooked up to a sewer site. This is because there isn’t enough water with each flush to carry all of the solids out of the tank and down the hose. Leaving the valves open builds what is affectionately known as a “poop pyramid” of hardened crap that is no fun to deal with. Always leave your black tank closed until it’s time to dump your tanks! And, when possible – only dump your tanks when they are 1/2 or more full. I target 2/3 to 3/4 to completely full before I empty my tanks. If your tank isn’t full enough, simply run water by holding down the foot pedal until the tank fills to the desired level.

Your gray tanks however, can be left open as long as you close them and accumulate water before you’re ready to dump the tanks. (Though, some people are of the opinion that they don’t want whatever sewer flies and nastiness in the ground having an open path to their camper and choose to leave them closed. I can’t say that I blame these people!)

So now- you’re actual sewer hookup. As I touched on in my post about having 2 sets of sewer hookups on my camper, here’s what (I feel) you need:

If you have 2 sewer connections like I do, add more hose and a wye to connect them together.

The dumping and flushing procedure is pretty simple:

Note, a full dumping and flushing on my camper – 2 black tanks and 3 gray tanks takes me a good HOUR.

I have never seen the need for the sewer supports and simply don’t use them. The weight of the water has never been an issue for me and when I go to disconnect my hoses- I simply walk the hose back to the sewer connection, squeezing the hose/milking the water out of the hose as I go. If you are going use a sewer support, a really cheap DIY option is just buying a piece of vinyl gutter and then using boards or Lynx Levelers to achieve the slope.

Out of respect for the next camper and “that’s just nasty”- don’t use the fresh water connection to clean out your sewer hose.

At the end of your trip at a dump station

At the dump station, you possibly won’t have time to repeat the flushing process if there are other people waiting. At that point, you’re likely only going to be able to dump your tanks and not actually flush them. The process is pretty basic:

Out of respect for the next camper and “that’s just nasty”- if the water source at the dump station is labeled “potable”, don’t use it to clean out your sewer hose.

Now, say you’re camping at a site without sewer but your tanks are full and it’s time to offload some gray or black water. There are still a couple of scenarios that come into play:

What is a honey wagon service you ask? The honey wagon is usually a truck/tractor and trailer combination that goes from campsite to campsite sucking out the contents of the tanks. You usually have to signup the day before at campgrounds that you want honey runs made to your site. They will have varying rules (for instance, one place I go to requires slides to be put in and out of the way for them).

I’ve only done this once and was left with tanks that were still 1/4-1/2 full when they were done and I don’t think it was merely toilet paper on the sensors. They emptied my 5 tanks in less time than it takes to simply dump 2 of them. Next time, I’ll make them use the clear elbow and will verify from that the tanks are empty before letting the guy gitty-up and go.

However, as the camper- you don’t need any equipment, not even a sewer hose. They do it all.

You have a tote to offload the stinky-stinkies into

If you have a tote to offload the gray and black water into, you would fill that using the same basic premise as the others:

Many handles on totes will hook onto a ball hitch and can be pulled behind of your vehicle at an excruciatingly slow speed. (Pro-tip from Dog Folks on RV.net– if going downhill to the dumpstation with the tote, bungee cord the handle to the ball to keep it from passing the truck! EWW!)

Some people will use what is called a macerator pump which lets them pump into a 1″ garden hose (in lieu of a 3″ stinky slinky) and up hill. They’ll put the tote into the back of their tow vehicle and pump the tanks out up hill thus saving them the super-slow drive through the campground.

You have neither- honey wagon offered or tote

You’re SOL and are going to need to either hitch up and drag the camper to the dump station or buy a tote.

I’d like to be able to dump at home

The final option is to empty your RV tanks at home. It’s really outside of my area of expertise, but there are 2 basic options here: 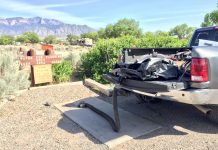 Dumping Tanks at a Dump Station