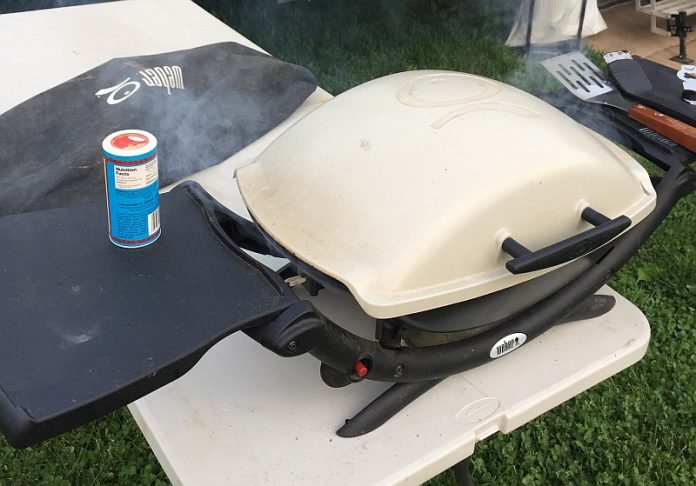 People get religious about their grills – most grills tend to develop a “devout” (read: cult-like) following. Growing up, it was Weber or bust. We had a charcoal grill that always seemed more magic and complicated than I ever took the time to understand.

So, what’s the best grills for RVing? The requirements seem sometimes contradictory – you’ll want a quality grill, but not too big, not too small, and, of course- something that magically stays clean (ok, maybe that’s just MY wish).

My first grill for the camper was bought from Walmart and it was a simple $30 charcoal grill. I used this for a good 4 years as our primary camping grill. It was compact. We could just squeeze enough food on it for the 6 of us (my family of 4 and my in-laws). It’s charcoal and charcoal-cooked food tastes so much better than propane-cooked food. It fit into a black garbage bag to contain the mess. Unfortunately, it didn’t fold down any so it took up a fair amount of space to store. And it wasn’t adjustable to manage the temperature of the food. I also learned the hard way that this grill heats up the surface below it and blistered a small table of mine.

If I had to do it again and was option for a charcoal-only grill, I would go with the Weber Joe. It’s more akin to what I grew up with- a charcoal grill that’s adjustable.  It would still suffer from the same issue with not folding down and likely heat up underneath of it. Because of that, I’d still be cooking on the ground and hunkered over it.

The grill I wanted

When I decided to upgrade grills, I started look at my options. The grill that I fell in love with was the Volcano Grill. I loved the concept of the 3 fuels- propane for convenience, charcoal for flavor, and wood when you want to go all out. It came with a carrying bag to keep it neat and tidy. Though, it still didn’t fold down to a small size.

But, my real issue with the Volcano Grill was the grill size. My family eats a lot- cooking for my kids is like cooking for 2 adults. Add-in that we have my in-laws along on a regular basis, and I just couldn’t imagine the grill was big enough. So much so, I cut a mock grill and mock food to prove it. Sadly, this wasn’t the grill for us.

I asked around on forums and Facebook groups as to what people were using. The responses were quite varied:

My choice, the Weber Q

When it came down to picking a grill, I ultimately opted for the Weber Q. Weber is in my roots- they’re the grills that my dad still uses to this day. But, they also get overwhelmingly good reviews.

The table under the grill stays cool. I’ve used this on plastic tables with no ill effects and often cook off the end of the picnic table. However, I really want to get it moved onto a stand so that I can free up my table.

Whatever grill you pick- cook something tasty! 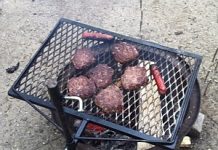