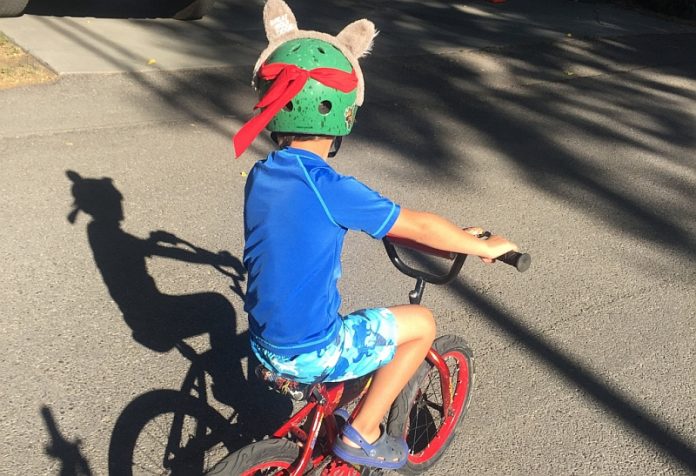 If there’s one thing that my family is good at- it’s losing keys (smile). The idea of a lock that we can control from our smartphones intrigued me. I reached out to NuVending for one of their Nulock Keyless Bluetooth Locks to put it through the paces. At camp, we will have 4 bikes and a stroller that we’ll often want locked up.

(For full disclosure: NuVending did provide a lock in exchange for a review. I do not let the free status sway my review.)

While camp thefts are rare, they do happen and bikes are often a mark because they’re easy to grab and dump. I’ve heard of bikes being cut off of the back of locked RVs while the owners slept. One of the features that I liked of the Nulock was that it will trigger an alarm if it’s jostled or cut. In practice, I will have to see the lock in action for a while before trusting it overnight (given the thin walls of campers and crowded conditions of campgrounds). I’m still waiting for the right situation in order to test that feature- I don’t want to be that guy with a blaring false alarm in the middle of the night!

To avoid sounding like an infomercial, let me start with the negatives- of which there are some real concerns.

Honestly, I like the lock. I did no research ahead of time but I was surprised at how short the 31″ cable was. It is good for locking a single bike but not if you have a set of bikes.

For a set of bikes, you’ll need individual cables for each and the cost is prohibitive for wanting to lock up 4 bikes and a stroller.

That said, there is a 47″ version that should be good for up to 2 bikes.

The alternative is to use a separate heavy cable and string them together but then you lose the “cable cut alarm” feature due to using a plain ole “dumb” cable. However, that’s what I did.

It’s a minor thing but the lock chirps to confirm it’s locked and unlocked and those chimes are annoyingly loud.

The lock’s app can provide notifications to your phone but I find that these got excessive and ultimately I turned them off.

My final and biggest negative is a key feature of the product- there is no key; not even as an override. In the case of a battery failure, your option is only to replace the batteries. This happened to me, fortunately when we were home and was still annoying.

In the case of a forgotten code (how you initially link it up to your phone), you have no recourse. This was actually due to a discussion in a review on Amazon– the solution is inelegant at best, but how to offer a master reset securely is an interesting/hard problem to solve.

Given that between my daughter, my wife, and I- one of us almost always has our phone on us. We always had the “key” for the lock with us.

The range is good. From my camper’s bedroom and living room, I was able to unlock the lock.

It’s fast. The app is quick to load and connect to the lock (even when I forgot and had turned off Bluetooth). Unlocking is equally as fast.

The steel cable version that they sent felt durable and strong. It was beefier than the steel cable that I used to run through the bikes themselves.

The lock is controlled via an app on your phone and connects via Bluetooth. The app download is as simple as using the App Store or the Google Play Store (this is one of those classic times- if you need help, find a kid or grandkid!).

The first time you run the app, you setup the phone to communicate with the lock. You need to make sure your Bluetooth is on (and if you’re setting up multiple phones/devices, make sure you turn their Bluetooth off to ensure they are no longer connected to the lock). If you have multiple locks (like I would need if I individually locked all of my bikes + stroller), you can name each lock individually (and I’d use a label maker to put the same name on the back of the lock!).

Once setup, unlocking the lock is as simple of a press of the screen. The lock chimes (loudly!) and then you press a hard button on the side of the lock to release the cable.

Locking is simply pressing a hard-button on the lock itself.

To combat the dead battery scenario, the app tells you the battery level. It came with 3 batteries. In our 2 weeks of daily use (and often times, locking and unlocking) we saw the battery dip between 10-20%. My hope is better batteries would last longer.

Ultimately, I give the Nulock Keyless Bluetooth Lock a recommendation with the understanding that the cable is shorter than I expected. But the convenience of not losing keys overcomes the expense of it.

Below are a few photos that I took as I opened the Nulock for the first time.