As I’ve mentioned a couple of times, I’m pretty well a stickler for weighing your rig. When I was a weekend camper, I did it- mostly out of the curiosity of things, but I liked knowing where I was at with weights. I felt better knowing- even safer (especially as much of a newbie as I was/am to towing; knowing that I was within all parameters for the vehicles that I was pulling was important to me).

When I did the Escapees SmartWeigh back in June or July when we first got on the road as fulltimers, I found that I was overloaded on one tire, and pretty well maxed out on 2 other tires. I also learned that my tires’ carrying capacity didn’t add up to be equal to the axle’s weight rating. Each tire is rated at 3,420 lbs. (times 2 tires is 6,840 lbs.) whereas they’re mounted on 7,000 lbs. axles. It’s my understanding that there are federal requirements that disallow this now (though, I don’t know when that went into effect). Either way, this all added up that I was due for an upgrade.

First things first, a note about this post- I’m talking specifically about 7,000 lbs. axles and 8-lug wheels. If you have 6-lug wheels and/or smaller axles, I strongly encourage you to look at the Maxxis m8008 tires (Amazon link) in the appropriate size or explore LT tires. I had good luck with my Maxxis until I overloaded them and would happily buy them again in an appropriate situation. The flip-side is to start to look at LT tires if you can find one with an appropriate load carrying capacity to support your axles. Do your research- LT vs. ST tires are hotly debated with both sides absolutely emphatic that they’re right.

The biggest obstacle that I have is that my axles are pretty close together. I had right about 2″ of clearance between the tires. I didn’t want to decrease that at all, if possible. But, I was finding that many tires in my size (235/80/R16) and my load range (E), the tires with higher capacity came with a larger outer diameter. It was usually not much, maybe 1/2″ – 1″ but it was enough that my current 2″ spacing would be reduced even further.

I did find the Goodyear G614 (Amazon link) and Sailun S637 (Amazon link) both came in basically my size and a higher load range/carrying capacity (load range G and 3,600 lbs.+ carrying capacity). They even kept the same outer diameter that I had before. The biggest thing to watch out for with these tires is if your current rims can handle the additional pressure requirement of 110 psi.

My concern with the Goodyear G614 is that there was a slight difference in rim width vs. what I had (I had 80, they’re listed as 85). I honestly don’t know enough about the specifics of tires to know one way or the other if that was going to be a problem. I’ve read of many stories of people who were just fine on them and a couple of “experts” who suggested that it may be problematic.

Both tires are getting excellent reviews. The Sailun is a good bit cheaper than the Goodyear, and, if you’re willing to go forgo the major brand. Current prices on Amazon have them at a $110/tire price difference.

Or, tires and rims?

Where I leaned was a major tire and rim upgrade. I was in a Facebook group with another long-time fulltimer and he was a big proponent for moving away from ST tires, 16″ rims, and opting for commercial trailer tires on 17.5″ rims. At first I dismissed it as it seemed impossible to be able to increase the rim width 1 1/2″ with the spacing requirements that I had. But, with commercial trailer tires, you can get a shorter sidewall (the “235” part of my tire size) and still have higher load carrying capacities. As it turns out, I was able to swap my 235/80/R16, LR E tires for 215/75/R17.5, LR J tires AND it’s a smaller outer diameter than before by 1/2″. The load carrying capacity jumped by an astronomical amount (from 3,420 lbs. to 4,805 lbs.) and the speed rating increased from 65 mph to 75 mph.

There are 2 well known providers for these 17.5″ combinations and I spoke with them both:

Personally, I opted for the Continental HTL2 Eco-Plus tires. I liked the idea that they were geared towards long drive days. I like the idea of commercial tires as it tells me they’re designed for a bit more abuse than non-commercial tires.

Installing new rims and tires sound daunting, but they came mounted and balanced straight from TT&W. The installation was simply a matter of a tire change- off with the old, and on with the new. The lug nuts line up and it was simple. I had a repair shop do it, but only because they were changing my springs already.

As with any aluminum wheel, it’s important to check torque on the lug nuts after 25-50 miles and repeat until they stop loosening.

The new tires have a max inflation of 125psi and for simplicity, I just air them up to max. I found that my Porter Cable 3 Gallon Pancake compressor couldn’t cut the muster with the tire pressure requirements. In fact, it maxed out at about 112psi and that was after many minutes. I started researching air compressors and that’s a blog post for another day, but longest story shortest, I ended up buying a Viair 450P and couldn’t be happier with it. 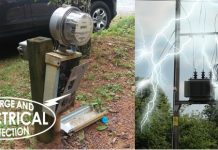 What Surge Protector is best for my RV?