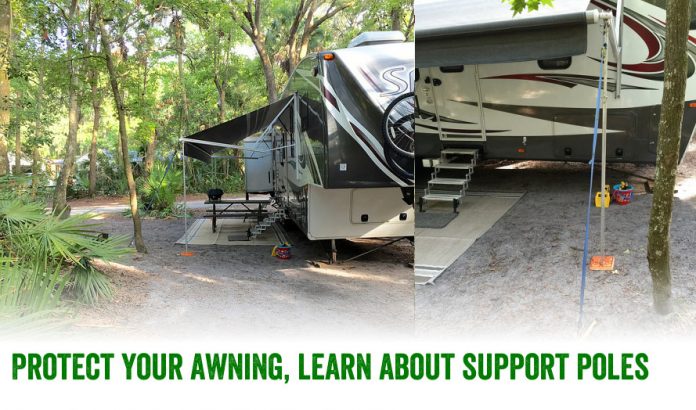 Power awnings are wonderful- you push a switch and it goes out. You push that switch again and it comes in. No messing with straps and pulling and magic (which is what I’m pretty sure manual awning take to extend/retract). And we’ll just ignore the rickety falling crashing death that was my pop-up’s awning.

The power awning is wonderful… except when it isn’t.

Did you know that your beautiful power awning was a super weakling? There are a ton of people with dire warnings that say, if the wind is anything more than a light breeze, you should bring it in? And never leave the awning out when you leave camp. Or overnight, gusts will come out of nowhere when you’re sleeping. It’s happened to them, their friends, and even their tiny baby kittens have lost tiny baby kitten awnings because they didn’t heed these warnings.

So what’s the point of an awning, if you can’t use it?

The answer is power awning support poles. The first time that I saw these, they were the brain child of a forum member on the Forest River Forums. He says that it wasn’t quite an invention because manual awnings have had the same concept for years- strong legs that connect the awning to the ground. The nice part of this is that it protects the awning arms both ways- they don’t lift because you strap the poles to the ground; and they don’t drop because the poles are there for support. You do need to ensure that you have enough pitch/slope in the awning so that water runs off and doesn’t pool. And important: if you have a fancy awning with a wind sensor, that you turn that off.

But, the power awning support poles are a game changer. Except for the roughest of weather, I typically deploy my awning when I setup camp and don’t run it in until I come in. I’ve had it out into wind speeds to 35mph (I checked a weather site the next day to look at gusts); though if the forecast is calling for 25mph or more, I’ll roll the awning up.

However, knowing that it’s pretty unlikely that I’ll have to roll my awning up- I’m able to hang those cute lights from the awning rail and really setup our patio area. Plus my chairs and stuff are better protected from the weather.

The nice part about these support poles is that they are self-storing. You install 2 brackets on each awning arm and mount the poles to them. When you roll the awning up, the support poles hang and are secured to the arms. There is nothing to stow/store between uses.

When deployed, the support poles attach to the end of the awning and extend to the ground. There are multiple holes for adjusting the pitch of the awning to support water runoff. They’re secured using ratchet straps down to a tie down point on the ground. I started using dog corkscrew tie outs but couldn’t be happier with my switch to The Claw tie downs. With dog tie outs, I couldn’t get them twisted into the ground in many places; with The Claw tie downs, I’ve yet to find a surface that I couldn’t hammer them into place (except concrete and black top, of course).

Where to Get Support Poles

There are 2 people who are making awning poles and brackets. The fit and finish on the original is a bit more refined, but both make an excellent product (I have the original and have friends with the new ones).

When OldCoot stopped shipping them Ron (aka TURBS on the forum) started making the poles and brackets. You can contact Ron through Forest River Forums. One really nice thing about Ron’s awning poles is that he works with a powder coater to make them white or black. They look really sharp.

I have seen a handful of pictures where people have made awning support arms out of PVC. As with most DIY projects, the nice part is they’re usually quite a bit less expensive. The downside with DIY projects is that they’re not usually as refined as a purchased product. The PVC poles work and work well, though.

There is always a weak link in any system. I had friends whose awning rail pulled out from their camper- likely from a bad installation initially. I have another friend who is getting a little bit of tearing of the awning material- I fear that’s going to be their weak spot when the wind really gets going (and in fact, he’s fixing to have this addressed in the next month or two to avoid any potential issues).

And sometimes, the awning is really far off of the ground. I’ve tried a variety of things to get the straps hooked on- including hoisting my 4 year old up there!

Of course, bad things can still happen. Use the poles wisely and accept that a certain amount of risk comes with keeping your awning deployed.