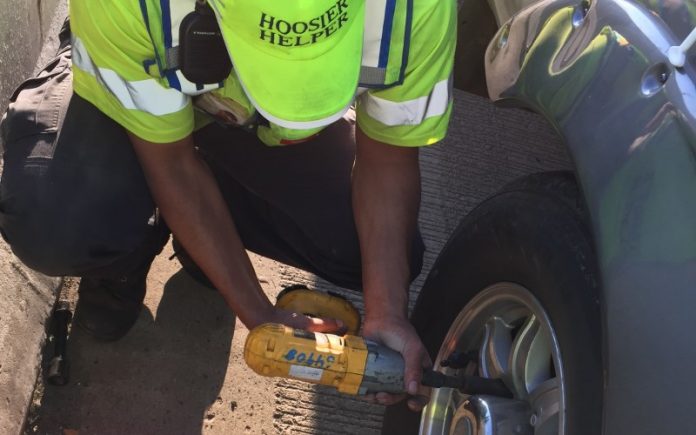 I was never a Boy Scout, but I do fully subscribe to the motto of “Be Prepared.” Especially in things that scare you or that you’re otherwise nervous about. Very high on my list is changing tires as it is something that I have very little experience with. Sure I have RVers roadside assistance (though Good Sam), but my past experience with AAA is that you wait for a very long time for them to get to you- ask me about the time that I sat on the DC beltway in a snowstorm for 4 hours.

Picture if you will- driving on a tire that you suspect has issues. It just doesn’t “look” right and your TPMS is showing pressure anomalies, but things are busy and you’re changing campgrounds each week. You know you should put the spare on to limp along until you can get it replaced; but it hasn’t caused issues yet and therefore you try to eek out a few more miles.

When I crossed the Illinois/Indiana border, I hit a fairly impressive pot hole. Almost instantly my tire pressure alarm went off and I pulled over.

First “being prepared” – my TPMS saved me from the tire disintegrating and the tread causing damage to the camper. I opted for one by Truck System Technologies (TST). I have the 507 system with flow-through sensors. I bought from Amazon but used their customer service a few times and I have been very satisfied with their support.

Once I got onto the shoulder, I wasn’t positive what to do next. I had heard of people calling the police to have a patrol car sit behind them to ward off distracted drivers. I figured this was a good idea and dialed 911. I hated taking up an emergency slot, but I didn’t want to become one! They offered to send out State Farm’s Hoosier Helpers. I asked about pulling up and off of the exit ramp, but they warned me to not go too far as the Hoosier Helpers can only help when I’m “on” the interstate.

While I waited, wife and daughter reminded me of my next “being prepared” item which was a gift they got me – a neon green safety vest.

I waited 10 or 15 minutes for the Hoosier Helper guy to pull up. As we waited, the tire continued to deflate. I also did the only logical thing and texted my dad to complain.

Finally feeling “safe”, I got out of the vehicle and started assessing the situation. First, I made acquaintances with the HH guy.

And, I assess the situation:

We talked and he asked if I had “one of those lifting systems” (meaning a leveling system). I don’t, but my next bit of preparedness came in (reading about RVing, a LOT!) and I had read that you can make a ramp out of wood/leveling blocks. I tried this once before and it didn’t go so well, but the friendly folks on the Forest River Forums made some comments that stuck with me. I made up a ramp and gently pulled the camper up onto it:

As you can also see, my preparedness with tools came into play. The Helper came armed with an impact gun. He tried rattling off the lug nuts, but didn’t have the right sized socket. We decided that instead of using the power tool, we would use a breaker bar and my deep well sockets. I did learn a trick that instead of using your arms/upper body to press on the breaker bar, just step/stand on it. More pressure, less work.

We broke the lug nuts free, but the tire was still firmly on the ground. The axle was lifted a good bit, but not far enough. I had always planned that I could use my truck’s jack (since it’s a 4×4) to raise the tires. Turns out, I’m sort of right and sort of wrong. The wrong: the jack is too short and I needed wood under the jack to lift it up (in hindsight, I likely need the same wood for the truck’s tires).

The right: once I put the block under it, it raised the tire perfectly. Even if it wasn’t the most comfortable getting to:

My one lack of preparedness came by way of air compressor. We got the spare out right away and I had quite a bit of panic that I almost never check its pressure and had no way of topping it up if it was low. I lucked out in that it had the proper amount of air AND if it hadn’t, the Hoosier Helper truck has an air compressor.

I got the spare back on and started tightening the lug nuts.

Once the tire was on and we lowered the jack, HH hit the lug nuts with his impact gun. I don’t know what they were torqued to, but I wasn’t going far and I did stop to check torque on them a few times. These wheels/rims and tires were soon replaced.

And then it was time to put everything away.*

As you can tell, it was a passenger side tire. My blocks are stored on the driver’s (road) side. Being terrified each time I went to that side, I decided not to put the blocks away in their usual home and instead threw most everything inside the door the camper. Being chicken-afraid, I also didn’t do a walkaround the camper which I do every time we stop.

* Putting it all together… when I got the Lynx Leveler blocks out, I moved a bin of toys. I placed it under the edge of the camper. I left it there thinking it would be one less thing I had to move when I put the blocks away. Not putting the blocks away and not doing a walk around meant that I left the bin of toys under the camper. As I pulled away, I must have hit it with the camper and that threw it into the road. Unfortunately, I was oblivious to it and drove away.

The Hoosier Helper caught up to me and flagged me to the side of the road. He told me what happened and offered to go back and pick it up. He did but unfortunately there was nothing to pickup. The toys were destroyed and bin was a total loss. Nothing expensive, just frustrating.

All told, preparedness was the key to handling this. While I hadn’t practiced these skills- I had the right tools for the job and the mental knowledge for how to tackle it. I am also thankful for the Hoosier Helper being a calm presence and reassurance for what I was doing.

Next, I had to decide what to do about this tire. Being overloaded on 1 tire and maxed out on 2 others, I didn’t just want to swap the same thing in. The next week, I dealt with that. 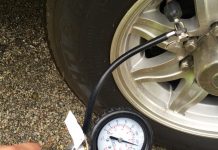 How and Why to Monitor Tire Pressure