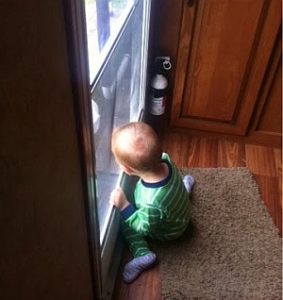 Little man wants to see everything going on around- to the point that he’ll push his head into the screen to get it to flex outward so that he can see more. On our July 4th trip (see comedy of errors and Kenisee Lake review), I actually noticed that he was pulling the screen out of the door. I had to use part of a screw driver to push it back in and we ended up watching quite a bit more closing.

Before the next trip, I wanted to come up with a better solution…

Camco makes an aluminum screen door grille. To be honest, I saw one at my local RV store and thought it was awfully expensive and awfully ugly. So, that led me to Home Depot where they had white versions of the same idea, but there were too large for my door and the area that I needed to cover. Honestly, I like the idea of a door protector better than what I went with because it allows air through, but only just now saw this fancy one (but truthfully- my cheapness would have stopped me from spending the $50).

Option B (and what I did) – Acrylic/Plexiglass Insert

As I looked at my door, I noticed that there is an inset groove on either side and a “ledge” of sorts on the top and bottom. (To be honest- I almost wonder if door manufacturers are expecting people to install plexiglass or the like on their doors.)

I measured the height and width as closely as I possibly could and bought a piece of clear acrylic. I would have preferred Lexan, but like usual- I waited until the last minute and they didn’t have the right size. I did throw the piece of acrylic around the aisle a few times, on its edge and flat to make sure it wouldn’t easily break. Given that this should be a low impact area, I think I’ll be fine. I did not buy the special acrylic cutting tool– I’ve heard from folks that they’re a lot easier to control than a utility knife.

Having no idea what I was doing, I did some quick Googling for “how to cut acrylic” and learned that it was pretty simple:

My first cut, I tried going freehand with holding the acrylic and metal yard stick. I have a few stray cuts where the knife jumped the groove. (I’m also very paranoid about this after my father-in-law knicked off the corner of his finger cutting dry wall last year!) But, it snapped pretty cleanly.

For my second cut, I used clamps to clamp the wood to the acrylic to the table to secure it. I then used 2 more clamps to clamp my metal yard stick in place. This line ended up much cleaner than the first with no stray cuts. For each one, I scored it way more often than recommended with doing a good (15-20 passes).

I sanded both edges with a piece of sandpaper on a block. I started with a fairly gritty piece of sandpaper and moved up to a 300 grit paper that I had lying around. It didn’t have to be perfect as it wouldn’t be terribly visible.

I wondered quite a bit how I was going to keep the piece in the door. I knew that there would be a certain amount of pressure holding it into place since it slide into grooves on either side. I wanted something that was easily removable and didn’t permanently alter the door (i.e. no screw holes). I knew the top and bottom ledges were close to a 1/2″ in height. After wandering around Home Depot late at night, I looked at different ideas (velcro, funky pin things, random other items) until I came across these 3M mounting squares. They were .68″, so I had to cut off a small strip off of each square (I did them a row at a time to make it easier). They really worked well- they stuck strong and pulled off cleanly.

Of course, as things go- I can’t find a picture of the screen protector actually in the door. But, longest story shortest – it looks like a piece of glass over the inside of the screen. Little Man has pushed and banged on it and the screen itself hasn’t budged. The piece stays in for travel but is easily removed if/when needed. 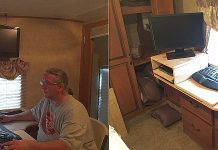 Building a Desk – Working from my RV