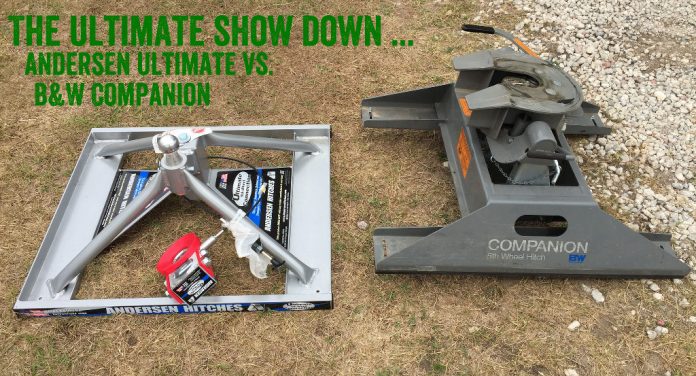 This is the third part of a 3-part series of posts on fifth wheel hitches. When someone asks online “what is the best hitch to get?”, the conversation almost instantly suggests either the B&W Companion hitch or the Andersen Ultimate Fifth Wheel Connection. Of course there are other options out there, but I find that both of these have cult-like followings. The Andersen-side of the conversation then comes with naysayers (most all who have never used the hitch). B&W also has its own detractors (some of which simply do it to argue to with the proponents!).

Fortunately, I’m one of the few people who have owned both hitches and have towed the same camper with the same truck with them. So, I’m excellently positioned to compare and contrast the two.

For disclaimers: I bought my original B&W at full-price and then couple of years ago, B&W gifted me a newer version. Andersen provided me with a hitch for the purpose of reviewing but especially for this comparison. So, free vs. free.

In the first part of this series, I wrote about the B&W Companion. Take a quick look and re-read my review on it.

In the second part of this series, I wrote about the Andersen Ultimate Fifth Wheel Connection. Take a moment to give it a re-read and see what I think of it.

Each connected to the gooseneck hitch installed under the truck bed (at least the versions that I used). The B&W Companion uses a post that goes down into the gooseneck ball hole. The Andersen uses the gooseneck ball itself. Above that, the installation isn’t a whole lot different for each one- tighten a handful of bolts to specific torque specs.

Additionally, the Andersen has an adapter that goes on the kingpin that needs to be installed.

As mentioned, the versions of the hitches that I used connected to the truck’s gooseneck. They both offer versions that connect to the standard 5th wheel rails. B&W also offers a version that connects to truck-specific pucks.

One point to the B&W puck version is that its ratings are significantly higher than the post-based gooseneck version. I think it’s something like 21,000 vs 24,000 lbs. This equals the Andersen.

Ease of Hook Up

With my Spartan toy hauler and my Ram 3500 long bed, the space between the lowered tailgate and camper is two inches or less. I didn’t have that “issue” with my previous Sabre. But, it was definitely something that became a point that my wife and I had to pay attention to.

So, let’s talk about hitching up. I posted a long time ago about my hitching steps. With the B&W, the “hardest part” is getting the height adjusted so that the king pin rides up the hitch’s coupler plate. With the limited space between the camper and truck, I like the traditional fifth wheel in that it physically prevents you from backing too far back. Unless I grossly high hitched and miss the hitch entirely, the hitch would stop me from backing into my camper.

Now, with the Andersen, the hitching process is a little different:

A couple of things that are important in all of this. First, there’s no mechanical stop when you back up. The very first hitch up was terrifying and took all of my trust in my wife that she would keep us from hitting the camper. We didn’t and it was fine. After a few hitch ups, it wasn’t as much of a nerve-wracking step.

For getting the ball under the coupler, you had to be properly far back and properly side to side. Think hitching up a travel trailer/bumper pull but easier because you can see everything from the driver’s seat and the coupler adapter has a funnel to help guide you if you’re off an inch or two in any direction.

Finally, you’ll notice that there isn’t any step for doing a pull-test. Truthfully, you don’t need one. The ball is either securely on the coupler or it isn’t. There’s no in-between. (That’s not to say the B&W isn’t locked- heck, I proved it once by forgetting to lock it  and then driving 60 miles.. but their instructions DO call for a pull-test.)

The B&W was always a solid performer. It never bound up. It was easy to hitch, easy to unhitch. I really have zero complaints about it.

The Andersen treated me quite well as well. I did have some quirks during my use. The biggest thing was that I noticed that it had rotated slightly in the truck bed. It never impacted performance, the truck bed, or the safety of the product. Of course, it could have been my own bad installation and my fault.

Even pulling 21,000 lbs., I never once had an iota of buckling or bending of the hitch itself that others have reported. It’s strong and solid.

Ride-wise, my wife and I felt like the Companion was more comfortable for us in the truck cab.

The single biggest selling factor of the Andersen is, it’s lightweight (about 35 lbs.) and ease of maneuvering. Andersen even markets it that you can literally hang it on the wall… no kidding.

The B&W Companion is a fair amount heavier, but it comes apart in 2 manageable pieces: the head/coupler and the base. I never had an issue getting them into or out of the truck bed. However, I did use a furniture dolly to maneuver it around the driveway and garage.

It’s definitely the A&W Ultimate Fifth Wheel Companion… or… yeah… I can’t completely pick one or the other. B&W was the first hitch that I had and I’m the self-proclaimed fan-boy cult club founder. The Companion is a stunning hitch and it always treated me quite well. Unfortunately, with the post and it’s 20,000 lb. rating, it was rated lower than my camper’s gross vehicle weight rating (GVWR) and what we roll down the road at (21k lbs.). I don’t like overloading anything when I’m towing.

The Andersen itself is also an excellent product. It’s a solid performer and I didn’t have any qualms or issues hanging 21,000 lbs. behind it. It’s lightweight makes it easier to remove from the truck and store. (Which ironically wasn’t ever a feature that I made use of as a fulltimer. I very rarely remove the hitch from my truck bed.)

So honestly, it’s a toss-up. If I had to pick, I’d tip my hat to the B&W Companion for it being slightly easier to hitch up. As well as it being a standard fifth wheel connection which means I can more easily (no fussing with the kingpin adapter) help friends and they can help me if such a situation ever occurs.