It’s been a bad stretch for my tires. Just prior to my last trip, I was checking air pressure in my 10 tires (willfully ignoring the spare – shame on me!) and found that they were all spot-on except for one: the rear driver’s side tire. It was about 10psi low (compared to a few weeks earlier when we went to Williamsburg where I checked tire pressures before that trip, as well).

I posted a question over at Forest River Forums asking for ideas of why this one might be low. The responses came pretty immediately that I had a leak and had to find it. It was either A) at the valve stem or B) likely a nail or screw or something. To check for A), they recommended putting water around the valve stem and seeing if it bubbled. To check for B), they recommended carefully inspecting the tire.

I started with B and found a nail. To find it, I got down on the ground and checked out the area of tire showing (outside, tread and inside) and then I’d move the truck a foot or so and do it again.

Now that I had a nail, I had to figure out how to deal with it. Here’s my confession- I have literally never changed a tire in my life. I’ve been there when other folks have done it and once where someone explained each step to me. But, I’ve never been the one responsible for changing a tire soup to nuts. Ever. (Much less on a car versus a 7-ton RV!)

The idea of jacking up the camper both intimidated me and proved to me that I don’t have the right tools for the job. The only jack that I have is the one that came from the truck. So, I poked around online and improvised a bit:

This almost worked – my EquaFlex suspension allowed too much travel and overcame the 5″ of height difference:

As you can see above, I used every last block of my 3 packs. I first checked how much room the upper/front/left tire could go before hitting the underside of the camper. It was a good 2 1/2-3 inches (no pictures, but I literally stuck my hand up there and finger measured it). So, I added one of my 2×10 boards to the top of the ramp:

And, as you can see – life was good. I was able to remove the tire and put the spare on:

My plan from here was to buy a new replacement tire and then switch it back into place where the spare was. First, I had an appointment at Jim Donnie’s RV Service Center – I was just going to leave the spare on for that and then switch things back when I got the camper back and new tire bought and mounted.

Sadly, the best laid plans don’t always work out. As I was doing my final walk around before leaving for Jim Donnie’s, I noticed a significant bubble on the inside of the front tire on the opposite (passenger) side.

From reading, it appears that the bubble could be a manufacturing defect or caused by some sort of road hazard/strike. It’s unlikely that it was a curb strike as it’s on the inside of the tire. It could be from potholes or it could be a crappy tire. Since I’m now looking at 2 new tires, I’m going to bite the bullet – yank these cheapo tires that came with the camper and buy a good set of Maxxis M8008 tires.

To make my scheduled service appointment, my plan was to replace this bubble-tire with the nail-tire and top up the air before travelling. However, the ramp trick which worked so wonderfully above failed miserably when I tried to gain a little extra height and the interlocking blocks separated. After that, I couldn’t get the remaining blocks to interlock properly (they slide and got slightly less mangled than the one that broke shown below).

I’ve gone out and purchased 2 6-ton Jack Stands from Harbor Freight. My intention is to properly jack up the side of the camper for tire changes. I didn’t need 6-ton stands, but they were the only thing that got me close enough to the height needed from ground to the underside of the frame. 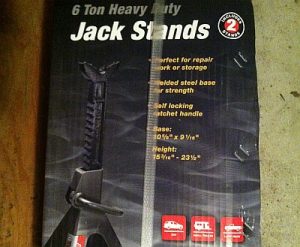 And so my saga continues… 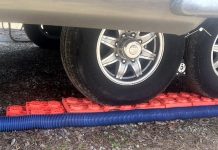