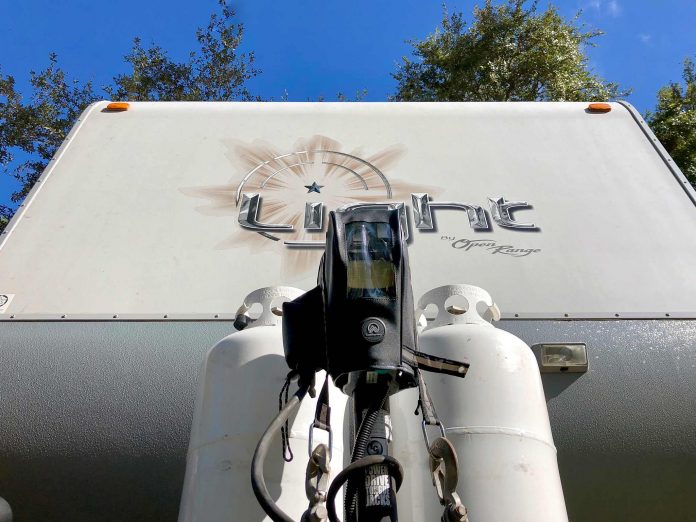 I’ve read a fair number of stories on forums, where travel trailer owners are asking “what is the best replacement tongue jack?” Why? Because theirs has died due to water intrusion. You would think that something that is designed to be outside would actually be… you know, designed to be outside! On top of that, the parts discolor, fade and look ugly. To combat it, many owners resort to the ugly upside bucket solution. It’s cheap and easy, but there’s a better way. Enter TrailerSphere’s Clever Cover.

Disclaimer: I came across this product on Facebook and I reached out to the TrailerSphere and offered a review in exchange for a product. But then I had to find someone to review it!

Turns out, we were visiting friends who also fulltime and they would be the perfect test subjects. They’re super honest and will tell it like it is. Their travels are similar to ours as they move every 1-3 weeks and would be able to put the cover through its paces.

TrailerSphere has quite the range of custom-fitted cover models for different tongue jacks. In our case, the friends have an LCI Power Tongue Jack made by Lippert. It is what came from the factory on their Open Range. If you don’t have this jack, check their site for other compatible tongue jacks.

Installation is quite easy – just unzip, slide it over the tongue jack, and zip’er back up. Almost not worth mentioning!

Having a cover will extend the life of your jack. I bet everyone who posted to forums asking about the premature water intrusion death of their jacks wishes they had one!

The tongue jack cover has a clear window for accessing the controls and still being able to use the integrated light.

On the sides are the hooks for the safety chains and a pocket/hanger for the 7-way power plug. My buddy was telling me that his favorite feature is the pocket for the 7-way plug, especially when he’s in sandy or dirt sites. It keeps the plug up off the ground and out of the muck.

Clever Cover by TrailerSphere
1 of 4

The fabric is heavy weight, often times double stitched, and includes simple but quick and nice features: a vent for the cover to breathe and even a spot to lock the cover in place. I can’t say I would have ever thought of needing to lock it on, but hey, it’s there. Time will tell how the cover holds up to being out 24/7, but I have high expectations for it.

The only con that I can really think of is the cost. For $40, you can get a lot of ugly buckets and there are a few less expensive / non-fitted covers on the market. But after seeing this one and having it in my hands, this is well worth the cost.

The tongue jack covers are available on Amazon. I believe TrailerSphere is working with RV stores to get wider distribution but for now, Amazon is it. (And seriously, look at those reviews! At time of writing: 60+ reviews, and all but a handful are for 5 stars! The ones that aren’t, are for 4 stars. You’ll love it, I’m sure!)

They’d make a great gift for that special RVer in your life!